Apple’s AirTags make it incredibly simple to locate and track stuff such as your keys, wallets, suitcases, backpacks, and more.

If you’re new to AirTags, or perhaps considering buying some, one question you might be curious about is, do AirTags require Bluetooth to work? Fear not because I have the answer in this article.

An AirTag uses Bluetooth Low Energy (BLE) protocol to communicate with nearby Apple devices for proximity finding. An AirTag also uses Bluetooth during the setup process.

At its core, an AirTag needs Bluetooth to send secure signals to nearby Apple devices in the Find My network for proximity finding.

If your AirTag is no longer within Bluetooth range of your device, it will use other Apple devices through the Bluetooth protocol in the Apple Find My network and use those devices to broadcast location data.

In addition to proximity finding and tracking, an AirTag depends on connecting to Apple devices via Bluetooth during the setup and pairing process, (typically your iPhone, iPad or iPod Touch) since there is no USB or USB-C AirTag cable port for connectivity.

From How Far Away Does Bluetooth Work?

According to Apple, an AirTag must be within a range of approximately 33 feet (10 meters) for a Bluetooth connection to work.

Bluetooth works at its best when there is a clear line of sight. And since AirTags do not use a cellular service, you should know that obstacles such as buildings, walls, and metal can have an impact on how effective and strong a Bluetooth signal and range is.

Inside an AirTag you will find a 2.4GHz 5.2 Bluetooth Low Energy antenna. The 2.4 GHz band is ideal for short-range communication, as it has a relatively low power output and is less prone to interference from other wireless devices. Additionally, its wide availability makes it an ideal choice for devices that require global coverage.

Can AirTags Work Without Bluetooth?

To work, AirTags must be paired to an Apple device such as an iPhone, iPad or iPod Touch using Bluetooth.

Without turning on your device’s Bluetooth feature, you can’t pair an AirTag during setup. Also, an AirTag sends a secure Bluetooth signal to nearby Apple devices within the Find My network. So despite having an Ultra Wideband antenna and an NFC antenna, an AirTag still needs Bluetooth to operate successfully.

However, if your AirTag is not near, your AirTag can also be put into Lost Mode, (just like other Apple products). When your AirTag is found by another Bluetooth Apple device, you will immediately receive a notification of its location. All this tracking and communication happens without your AirTag connecting to WiFi.

Hopefully, I have answered all of your questions on, do AirTags require Bluetooth. However, you may still have other questions surrounding Apple AirTags. If you do, below, I answer some common frequently asked questions.

What version of iOS is required to use an AirTag?

An AirTag requires iOS 14.5 or later.

What version of Bluetooth does an AirTag have?

How often does an AirTag transmit a Bluetooth signal?

An AirTag transmits a Bluetooth advertisement every two seconds.

Final Thoughts On Do AirTags Require Bluetooth To Work

So, in conclusion. Do AirTags require Bluetooth to work? Yes. AirTags will not operate without Bluetooth. An AirTag needs Bluetooth as part of the setup process when pairing with an Apple device. Also, an AirTag transmits a secure Bluetooth signal to nearby devices in the Find My network for location finding.

Can You Attach An AirTag To AirPods? (Never Lose Your AirPods Case Again)

Do AirTags Have Lithium Batteries? (Solved) 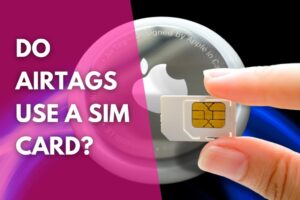 Do AirTags Use A SIM Card? (Solved)